Here's my hero factory MOC, the fire wolf! Here's a picture of it. 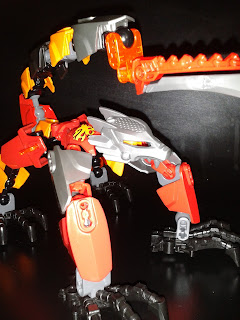 Background: These species of wolves live near the volcano of Makuhero city. They are more aggressive, unfriendly and more protective then any other species of wolves. They don't eat plants, but they eat anybody who comes near the volcano! In fact, they even eat animals living in the lava itself too! These species are also extremely protective of their young, and will do anything to stop the intruder from eating their young. Like any other species of wolves, they are not infected by the brain creatures yet. Their tail can put lava onto those brain creatures to defend themselves and prevent them from being infected by the brain creatures.
That's it for now and I hope you like this MOC!
Written by Lynn
Posted by Anne Lim at 5:23 PM