Here's my Lego hero factory MOC, Johnathan Explode! Here's a picture of him. 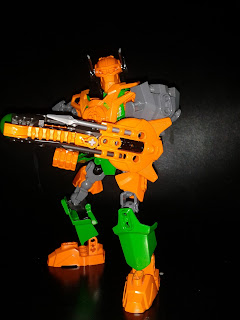 Background: Johnathan Explode was a hero built in Hero Factory as part of the few war zone heroes during breakout. He was best friends with David Firebomb and they would always go together on missions. Johnathan once blocked a huge attack for David Firebomb which would have splattered his hero core, but he eventually recovered, and Merrick caught this thing of him that he asked him to join Hero Recon Team. However, Johnathan rejected him and continued to only serve Hero Factory. After doing another war zone mission, he was upgraded to custom form and got a spear missile shooter.
Written by Lynn
Posted by Anne Lim at 12:16 PM