Here's my Lego ninjago MOC! It's called the temporary base by Sam Darkness and I'll give you a quick bio on him.
Basically, Sam Darkness is a character that I made up for Ninjago RP and he is on the neutral side. Using this character, I used to be in the masters of spinjitzu HQ. He was Luke Flames and here's his bio.
Name: Sam Darkness
Weapons: The sword of darkness, a dark bow, flame daggers and lava kunais
Background: Sam Darkness used to be Luke Flames, who used to be a ninja of fire and lightning. But later, when he left the masters of spinjitzu HQ, he saw some dark matter and wanted to take it back to his base to do an experiment. Unfortunately, he was infected by it and his suit turned from orange to black. Lavera, his dragon, was also infected by dark matter and turned from a dragon of light and lava to a dragon of darkness and lava. After that, he took some dark matter and took it back to his home. When he gotten back, he made a bow. He melted dark matter into liquid and diluted it with water. Then he added some chemicals to the mixture and formed them into arrows for his bow. He also made anti-venom for it. He then named his new custom material, Dark Metal. Dark metal is able to deflect/absorb all elements except for the only element opposite of Darkness, which is light and not many ninjas knows how to use light properly to fight against these indestructible weapons. If the light is used correctly, it can even reform it to another weapon and fight for the person who knows how to use light. He also made another similar material which he used lava and fire instead.
Element: Darkness
Age: 20(Not real age)
Personality: Calm, collected, cool and serious
This MOC basically just shows where he stays before he joined the rouge ninja HQ
Here's a picture of him.


A few pictures which shows the MOC. 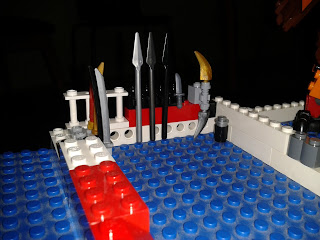 The weapons room is filled with 3 different types of sword of darkness, one stronger than the other. Same with the arrows for the bow, but the strongest for both of them are the black ones. He just make 3 of each to make sure he has backup if he loses the black ones. He has a flame dagger which is just beside the gold sword. The lava kunai is beside the black arrow which is obviously shown on the picture.

That's it for now and I hope you like this MOC!
Written by Lynn
Posted by Anne Lim at 6:09 PM