Here's my Hero Factory MOC, Cedric Firelaser! Here's a picture of him. 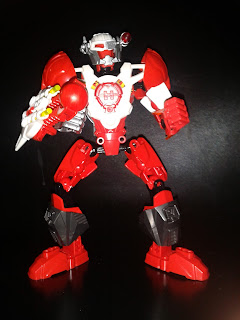 Name: Cedric Firelaser
Form: Custom
Weapons: Multi-tool shield with fire lasers and a flamethrower
Colours: Red, white and a bit of black
Personality: Cedric always has patience to train his students in the skills of speed, agility, strength, defense, endurance and stealth. He also practices his skills everyday to keep it sharp. Likes to meditate and prefers peace.
Affiliation: Hero Factory
Team: -
Location: Makuhero City
Status: Alive, active'
Background: Cedric Firelaser was built in the days of 1.0, but now upgraded with the new system of joints, which he prefers more.
Firelaser, like Quickfire, wasn't really all that satisfied with the stuff that Hero Factory had. He was also the basic skills trainer(meaning endurance, speed, strength, agility etc) and always had difficulties running properly. When he got upgraded in 2.0, he was so good at running that he could just chase up with Speeda Demon on foot.  He could also easily defeat the villains with all these skills. Plus, he was the lead trainer, which means he was quite fit. Whenever there's a mission, he was always ready, and always succeed in catching the villain. In Breakout, he had nothing to do, but still got upgraded, so he participated in Makuhero City's Marathon race. His best friend, Jay Acshooter(Ac stands for accurate in his name. So basically, his name is Jay Accurate Shooter), also participated in it because Cedric suggested him to do so, but of course, Cedric won 1st while Jay won 2nd because of how he's a trainer of speed and he's always practicing. However, when it comes to shooting, he's not that great. Jay, on the other hand, is great at this skill, and whenever they have shooting competitions, Jay's shot will be directly in the middle of the target. He is also very muscular from the things he does in his free time. Occasionally he plays video games. Cedric and Jay do not wish to upgrade to Brain Attack form as they think they do not need the upgrade and think that they are strong enough to defend themselves from the creatures. Both of them are the 5th best heroes. Also, upon knowing that their cores were made from quaza, they installed a quaza core charging device in their rooms so that whenever they need to recharge their cores, they can just recharge in their rooms.
Written by Lynn
Posted by Anne Lim at 10:30 AM