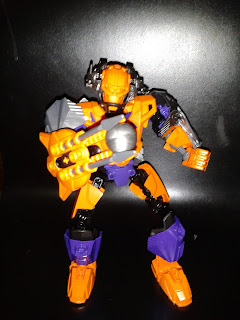 Name: Jay Acshooter
Form: Custom
Weapons: Multi-tool shield with plasma sphere shooter and arrow shooter
Colours: Orange, Purple and a bit of silver
Personality: Jay Acshooter trains his students flying and shooting skills by heart and by mind. He also likes to crack up jokes to keep up the student's morale if they ever get disappointed with their shooting skills. He also likes to have running competition with his best friend, Cedric Firelaser just for exercising. Like Cedric, he also likes meditating, so sometimes, one goes to the other's room to meditate together.
Affiliation: Hero Factory
Team: -
Location: Makuhero City
Status: Alive, active

Background: Jay Acshooter was built in the days of 1.0, but now upgraded with the new system of joints, which he prefers more.
Jay Acshooter was built as a shooting and flying skills trainer and trained many heroes. Jay, like Cedric and Zack, he wasn't really all that satisfied with the stuff that Hero Factory had.  When he got upgraded in 2.0, he was able to shoot at items more accurately than ever and fly as fast as Speeda Demon's motorcycle. Like Cedric, he could easily catch the villains with all these advantages.Plus, he was the lead trainer, which means he was quite fit. Whenever there's a mission, he was always ready, and always succeed in catching the villain. In Breakout, he had nothing to do, but still got upgraded and didn't know what to do. Cedric suggested him to join Makuhero City's Marathon race as he was also participating in it. He thought it was a good idea and joined it.  But of course, Cedric won 1st while Jay won 2nd because of how he's a trainer of speed and he's always practicing. Jay's shooting skills are razor sharp because of being a trainer of shooting, but not his speed. He is also very muscular from the things he does in his free time. Occasionally he plays video games like Cedric. Cedric and Jay do not wish to upgrade to Brain Attack form as they think they do not need the upgrade and think that they are strong enough to defend themselves from the creatures. Both of them are the 5th best heroes. Also, upon knowing that their cores were made from quaza, they installed a quaza core charging device in their rooms so that whenever they need to recharge their cores, they can just recharge in their rooms.
Written by Lynn
Posted by Anne Lim at 10:30 AM