Here's my Hero Factory MOC, Simon Shadow! Here's a picture of him. 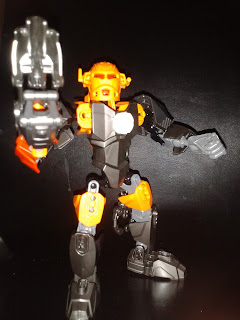 Name: Simon Shadow
Form: Custom or Breakout?
Weapon: High powered quaza energy shooter
Colours: Orange and gunmetal grey/dark pearl grey
Personality: Despite being made with a corrupted quaza hero core, Simon Shadow was a heroic and passionate hero and has a great sense of justice. He will never allow villains to hurt innocent citizens of Makuhero City and will do anything to stop them, even if it costs his life.
Affiliation: None
Team: -
Status: Alive, active
Background: Simon Shadow was one of the few heroes who was created by Aldous Witch and had put a piece of corrupted quaza in his core, hoping to activate him and make him become his servant. However, due to the heroes coming to attack him, he had to leave him there without activating him. He was in stasis for quite a while until Merrick Fortis discovered him there and activated him. Then, he took Shadow to the Hero Recon Team headquarters to see how he performs in the simulation battles. However, he seems too aggressive and it looks like he may harm his nearby teammates, so he was considered a villain. Merrick Fortis was going to tell Mr Makuro to send over a hero to put Shadow in prison, but he escaped and Merrick could not hold him back. He sent his Hero Recon Team agents to hod him back, but all of them gotten injured doing so. In the end, Shadow went out of their headquarters and was left out in the streets. All Hero Recon Team members saw him as a 'Corrupted hero', but they got the wrong idea of him. The truth is, he actually wanted to show them his skills and what he was made of. He was only welcomed back by Hero Factory when he took a villain back, but they still did not trust him. However, he had to do only missions with other heroes, which he doesn't like because he knew other heroes will still have that bad impression of him. He was assigned into Zavier Supershot's team due to the lost of their team member, Marcus Flamesword. However, Zavier Supershot had  very bad impression of him and kept telling Mr Makuro that he did bad things during missions. As a result, he was kicked out of Hero Factory once again, leaving him alone in Makuhero City. He went ahead and captured many villains Hero Factory could not catch.
That's it for now and I hoped you like this MOC!
Written by Lynn
Posted by Anne Lim at 9:00 AM