Here's my Lego Hero Factory MOC, Nick Cold! Here's a picture of him. 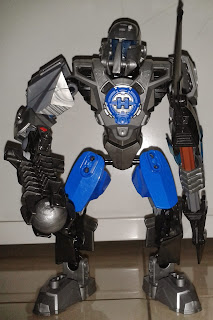 Name: Nick Cold
Form: Around a mix of 2.0 and breakout
Weapons: Blaster and a crossbow
Colours: Silver, blue and dark pearl grey/gunmetal grey
Affiliation: None(He's an exiled hero of Hero Factory)
Status: Alive, active
Team: -
Personality: As his name implies, he is sometimes a rather cold blooded hero, and he usually keeps secrets to himself. Sometimes, he has a ulterior motive for doing some actions, and when asked why is he doing that, he pratically ignores the question as if it wasn't told. He would be helpful at times, but it's nearly not visible from him a lot of the times.

Background: Nick Cold is a hero built in the Hero Assembly tower of the Hero Factory, although he was later exiled for some reasons.
He did a lot of missions and was even promoted to the leader of his old team. During the breakout, he was sent to capture a villain with his breakout armour. Later, he was found to be storing bombs in his room, thus, leading to his exile because Hero Factory fears this hero will use the bombs stored to destroy Hero Factory but the true reason why he stored the bombs was because of a warning in his dream that a very dangerous villain will come and destroy Hero Factory. He even had the looks of the villain in the dream. After he got exiled, he cared less about Hero Factory and just lived his own life, though he still battled villains, which Hero Factory didn't knew about. In fact, he even battled the villain that he had seen in his dream in real life twice. He couldn't care less about Hero Factory now since he is already exiled by them even when he had given his true reason. In fact, he was even angry at them, and wishes to take revenge on them someday, though he is held back by his conscience.
That's it for now and I hoped you like this MOC!
Written by Lynn
Posted by Anne Lim at 6:09 PM