Here's my Lego Hero Factory MOC, Jarek Armour! Here's a picture of him. 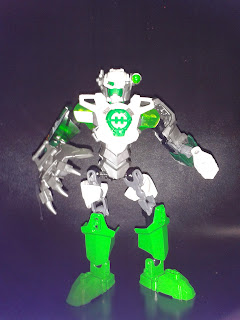 Name: Jarek Armour
Form: Custom
Weapon(s): A 3.0 claw
Colours: White, bright green and silver
Affiliation: Hero Factory
Personality: A smart and inventive hero, he is the armour specialist of Hero Factory and is very strong as well.
Status: Alive, active
Team: -
Background: Jarek Armour was one of the most earliest hero created in the Hero Factory assembly tower.
When he was created, he always had that inventive personality especially on anything related to armour, so Hero Factory decided to put him as the armour specialist. Like some of the other inventive heroes, he found the 1.0 system a flaw, like how the arms of the 1.0 heroes couldn't have any armour. With the weapons specialist, Jethro Weaponary and Zack Quickfire's suggestion, they worked together with Zib, a few other engineers and Mr Makuro and developed the 2.0 system, giving it maximum armour slots, wide variety of weapons and better flexibility. As per the storyline, the system was first tested on Nex and Evo.
Later, Jarek used the available armour and made armour such as the body armour for different uses such as for arm armour and leg armour. Later, he even discovered that the armour representing the fire villain's cores could be as detailing for the heroes' armour. He still continuously discovered usage of armour and new armour for the heroes to use. His weakness being on weapons, he could only come up with a 3.0 claw for his weapon and usually relied on his martial arts skills and his strong armour to defeat an enemy. His most recent experiment with the armour pieces was a mech, which he let Arro to test it, and it was a success. Later, he assigned another hero to help him construct a remote builder to build mechas on the spot with. With the later invasion of gigantic beasts, he got the hero that he assigned to make the remote builder to give one to  the Alpha team to defeat those villains.
That's it for now and I hoped you like this MOC!
Written by Lynn
Posted by Anne Lim at 9:00 AM