Here's my Lego Hero Factory MOC, Micheal Voltage which I built in Lego Digital Designer! Here's a picture of him. 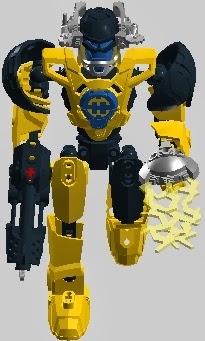 Name: Micheal Voltage
Form: Custom
Weapons: Lightning blade, gun with hook
Colours: Yellow, blue and black
Personality: Voltage is a laid-back hero and so he gained a bit of dislike from Johnathan Arrowgun, his team leader. Despite that, he is still a loyal team member, and he can easily transition from his lazy laid back personality to serious villain fighting which is a good thing. He is also honest.
Status: Alive, active
Team: Zeta team
Background: Micheal Voltage was a hero made during the 3.0 era and also thus 'born with the upgrade'.  But also, because of that, he did not know anything about the previous leader of Zeta team, since the 1st leader died before the 3.0 era. However, the funny thing is, he did not have any animal form even though he was born in the 3.0 era.
Voltage has always been a laid back hero and because of that, he skipped a lot of Zeta team's training sessions, which makes Johnathan slightly dislike him. However, his pleasing point is the fact that he can transition from being laid back to serious while fighting villains. Not much is known of the missions he did. Despite skipping so many team training sessions, he managed to get fully trained, so rumours started coming up on him going to train with someone else rather than participating in team training sessions and Voltage admitted bravely that it was true.
Prior to breakout, he had to go and capture Xplode, thus, he was upgraded with explosives-proof armour. When he arrive, he immediately managed to capture Xplode, since he caught Xplode by surprise. He returned to Makuhero City in the Heropod, but when he had arrived, the fail safe shield was coming up while Daniella was there. Voltage then decided to wait there while making sure Xplode does not escape. Because of his great sensors, he sensed that Arrowgun, his team leader, had arrived after a few minutes, so he contacted him and Arrowgun realised that Hero Factory was invaded by Black Phantom, so Arrowgun told Voltage to stay put. After Arrowgun was informed of the defeat of Black Phantom, he informed Voltage about it and told him it was safe to take Xplode out and into the Hero Factory building to put in back into the prison.
During the brain attack crisis, Voltage participated as well and because of Arrowgun noticing the weak spots of the brain creatures earlier than Bulk, they managed to get the brain creatures off the animal's heads earlier than Alpha team and put the brain creatures back to prison. Voltage later had a custom form because of he
succeeded in a mission that would have nearly 1% chance of succeeding and was also invited by the Hero Recon Team to join it. Voltage accepted and began doing double duty like his team leader.
Upon the arrival of Invasion from Below, Arrowgun told his whole team to not go for it in order to train for other missions, and also for security reasons, especially since Breakout Hero Factory has been caring on the Hero Factory building security much more than they used to.
That's it for now and I hope you like this MOC!
Written by Lynn
Posted by Anne Lim at 9:00 AM