Today, I went to Toys "R" Us at Suntec City and bought 2 Lego sets for Christmas, Stringer and Nex. Each set costs S$17.90.
Now as everybody knows, these so called "smaller" sets are few in new pieces and stuff like that. However, I did not really had all the armour pieces released by Lego. So, I bought these 2 sets just for pieces. In my opinion, Both sets are good but I'm really displeased with Stringer because he is so skinny unlike his 1.0 version, which is way more bulkier. I just revamped him a little bit, and here's 4 pictures of him:


Now onto Nex. Now since Nex was not bulky in version 2.0 or 3.0 and was very normal, so I did not do anything with him. All I did was take one picture and leave him alone. However, I have one comment: His laser cutter is extremely weird! Anyway, to the picture! :P 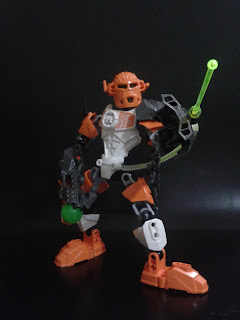 Hope you enjoyed my review!