As promised, I will make a how to on Amos Swordman, one of my MOCs! I know I haven't posted a bio on him so here it is! 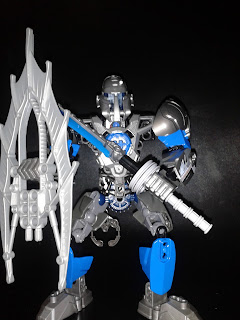 Name: Amos Swordman
Form: Custom???
Weapons: Ice katana and shield
Colours: Silver, blue and gunmetal grey/ dark pearl grey
Personalty: A calm, collected and ready for anything. However, he usually prefers to do missions alone so that he doesn't have to always follow the leader's orders.(Usually he's not the leader in a temporary team.)
Affiliation: Hero Factory
Team:-
Location: Makuhero City
Status: Alive, active
Background: After Shaun Burst's discovery of a half burnt Inika torso in his return to his home planet, he brought it back to Hero Factory and they fixed up the torso and brought the design to the assembly tower to test it out. The first hero to have this torso is Amos Swordman(Torso credit goes to toatrifernuva). Like his name suggests, he was really interested in using a sword to fight. So, he went to train with Clement Swordmaster. As he held a katana, he was suggested to learn Shinkendo. He agreed and he started training. When he finished his training, he was great with the sword and since  then, he preferred to go for missions alone. Of course, sometimes Hero Factory has to go against his wishes.
Here are the parts needed to build him.

Here's the video of how to build it.


Please give me credit if you built him. See you in part 3!
Written by Lynn
Posted by Anne Lim at 10:30 AM