Here is my Lego Hero Factory MOC, Ron Flare! Here's a picture of him. 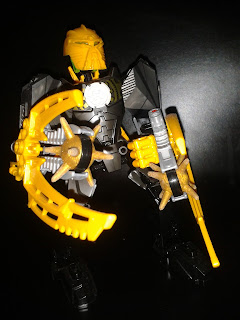 Name: Ron Flare
Form: Custom
Weapons: Light mine blasters
Colours: Black, gunmetal grey/dark pearl grey and yellowish-orange
Affilitaion: Hero Factory
Status: Alive, active
Team: Elemental Force
Location: Makuhero City
Personality: He is a rather hot headed hero despite his element of light, although it is possible that his hot headed personality came from the element of fire because light sometimes can be hot and fire is also a source of light. He is also fiercely protective of his other 2 rookie friends.
Background: Ron Flare was a hero made in the assembly tower and was immediately made with the bio-mechanical upgrade and his hero core was made with liquid light and quaza. He, along with Rick Concrete and Luke Splash were integrated into The Elemental Force when they came back from a mission. They did a lot of missions and received a custom form.