Here's my Lego Hero Factory MOC, Preston Shademag! Here's a picture of him. 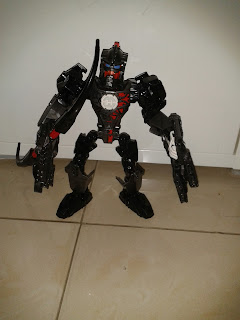 Name: Preston Shademag('Shademag' is short for Shadow Magnet)
Form: Breakout
Weapons: Shadow bow and magnetic dual guns.
Colours: Black, dark pearl grey/gunmetal grey and a little bit of red
Affiliation: Hero Factory
Status: Alive, active
Location: Makuhero City
Team: None, though was once temporarily grouped with Shaun Burst, Albert Breaker and Chris Arro for a mission to get the brain creature off Pyrax's head.
Personality: A patient hero who could wield the shadow element without being bad and hold the power of magnetism properly. He is also a loyal hero who is determined to do well.
Background: Preston Shademag is one of the youngest heroes in Hero Factory and is also the 1st successful prototype of heroes wielding the element of shadow AND magnetism.
Being a young hero, he hadn't really had a lot of missions, and he was the first to not go crazy upon wielding the two dangerous elements. He could use the power of magnetism to fly up and shoot at villains with his shadow bow. Thus, his last name was called 'Shademag', as a short form of 'Shadow Magnet' for he had the ability to control both of those powers.
His most recent mission, being the mission on Pryax, was successful. They found out a way to nail him down and managed to get the brain of his head and Pyrax went for freedom(this was originally a stop motion series I planned to make called 'The Chronicles of Pyrax' but I only made two episodes and then later on I was too lazy for long lived stop motions and I had the urge to disassemble my MOCs so it was later cancelled). He still needs more experience before he can get a custom form.
That's it for now and I hope you liked this MOC!