Here's my Lego Hero Factory villain MOC, Tosic! Here are 2 pictures of him. 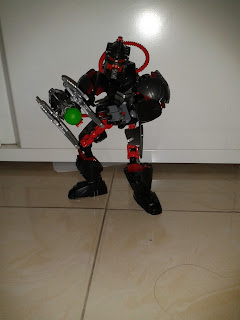 Name: Tosic
Weapon: Plasma gun(Formerly;when he was a hero), toxic gas blaster with blades on the sides(currently), riffle(currently)(he occasionally uses this)
Colours: Dark red/maroon, gunmetal grey/dark pearl grey, black, bright red
Personality: When he was a hero, he always tries his best to capture villains and also suggest to his team leader plans on how to capture them. Now, he's a cunning, cowardy(well, most of the time, since once he sees someone who sees him committing a crime, he just sprays his toxic gas at him and he will go unconscious. Then, he chooses to either get away, stay there and finish up his crime or kill him. If it's a hero, it will be those 3 choices plus if he wants to, he can just take out their hero core as a form of 'victory memory') and scheming villain.
Affiliation: None
Status: Alive, still out on the loose
Quote:
"How worse can Hero Factory get with their heroes? The team that I was put into kept pushing the blame to me when it isn't my fault!"
Background: Not much was known of Tosic being a hero, but it is known that he was placed in a team of heroes where the leader is super strict and the other members are really muddle-headed. Whenever the team gets scolded for not catching the villain, his team members always point to him and say that it was his fault when most of the time, it really isn't. When he found villainy interesting, he ended up betraying Hero Factory and became a rogue hero.
Of course, after being a rouge hero, the first thing to do is to get the hero core away from being displayed in the front. In the end, Tosic managed to do that and placed a chest piece on his body armour. Then, he got himself an extended neck. After that, he went to a gas factory where it has tons of poisonous gas and he took stole a lot of them for his own use. He turned his plasma gun into a toxic gas blaster and also got some additional blades put on the sides. He turned his hero hand into a claw hand and part of his right arm into a Bionicle lower arm piece. Due to having a toxic gas blaster, he had to get a oxygen tank, so he stole one from a shop. Then, because he wanted to support more of his villainy, he went to paint his body into all of those villain colours(his hero colours were not black, bright red, gunmetal grey or maroon.. His colours were something else). The first thing he did after he changed his whole body was to seek revenge on his former team, particularly because of how much harm they did to him by always putting the blame on him. He made his former team members unconscious, then took out their hero cores, and they were dead. He did more villainy and more crimes, and once he managed to salvage a very powerful and good looking riffle from one of the heroes he made unconscious/killed. Unlike Core Hunter, he doesn't really like to always collect hero cores from dead heroes, unless it is a huge victory that he wants to mark(like he killed his former team members), then he will take their hero cores. Otherwise, it is very unlikely of him to take out the heroes' hero cores. All heroes that were sent to capture him was either killed or put in an unconscious state by his toxic gas blaster. His toxic gas blaster, when changed to shooting shots mode, is able to made things shot by it explode. Although, he really doesn't like to use that mode because its exploding impact is very big, and if used on a hero, his armour pieces will come flying in Tosic's direction and he will also get slightly injured, which also means he will not be able to get away quickly.

Written by Lynn
Posted by Anne Lim at 7:25 PM