Here's my Lego Hero Factory MOC, Vocanus! Here are 2 pictures of him. 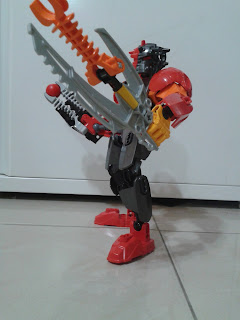 Name: Vocanus
Weapons: Flame thrower and flame sword
Colours: Dark pearl grey/gunmetal grey, red and orange
Personality: Vocanus hates people who say lies but he is a pyromaniac. He is the leader of the fire villains and he accepts no failure, meaning to say, he expects this much from himself too.
Affiliation: None, but he is the king of all fire villains
Status: Alive,in the prison
Quote:
"I love destruction, but I hate lies. I have not ever told any lies in my whole live."-Vocanus to Ray Burner, Trails of fire
Background: Not much is known about Vocanus's past, but it is known that there was a leader before him and he was second in command, but because the first leader died in a battle against a lot of heroes, he took over the leader spot. Many heroes had tried to go up against him, but they were either imprisoned by him on the Fire planet after they went unconscious, or the heroes were killed. After Vocanus sent one of his minions to be a crashing fireball so as to give Makuhero city a warning, Hero Factory sent two teams, one being the Back up team, the other one being The Elemental Force. They eventually defeated him(but the real hero who defeated him was really Ray Burner, the rest only helped in the beginning) and put him into prison.

Written by Lynn
(Read up more about the mission to catch Vocanus by clicking here!)
Posted by Anne Lim at 9:00 AM