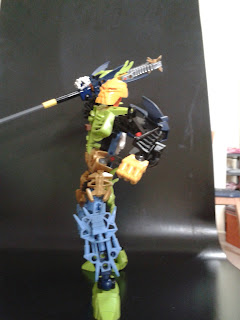 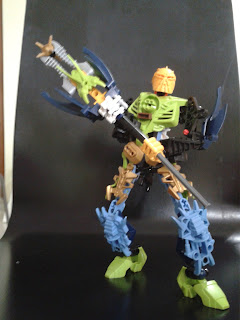 Name: Slimey Reepa
Weapon: Staff with thronax launcher on the top
Colours: Gold, blue, orangey-yellow and lime green
Personality: When Slimey Reepa was in the Bionicle region, he was fiercely protective of his friends and the other slime tribe members. However, in his regards towards Hero Factory, he really hates it for being his 'replacer' and wants to destroy it.
Affiliation: None
Status: Alive, currently in Hero Factory prison
Quote:
"Hero Factory is my worst nightmare! It replaced me! I must destroy it!"
Background: Slimey Reepa was once a highly ranked Glatorian in the Slime Tribe. He fought with other glatorian and won many battles and helped his tribe get a lot of things. He even won the Grand Tournament once. After Makuta Teridax died, he resided in Spherus Magna like any other Glatorian. However, when he knew Hero Factory came into existence and known to be 'Bionicle's replacer', he was mad and since swore to destroy Hero Factory no matter the costs. He wreaked havoc in Makuhero City a lot and Hero Factory continuously sent heroes to capture him, but to no avail until after the breakout, Tim Blast arrived with Shockiburst who wanted to become a hero. So, he was outfitted with hero armour and set off to battle Slimey Reepa. Burst eventually won and took Slimey Reepa back to Hero Factory, caught and cuffed. Then, he was put into villain storage.

Written by Lynn
Posted by Anne Lim at 5:47 PM