Here's my Lego Hero Factory villain MOC, Strongarm! Here's a picture of him. 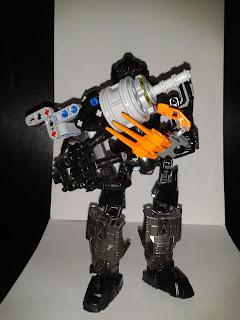 Name: Strongarm
Weapon: Riffle and Staff(Which I forgot to take a picture for the staff. :P)
Colours: Black, gunmetal grey/dark pearl grey and orange, the thing that really always gives him away and as much as he wants to, he wants to hide it.
Personality: Cunning, evil and always makes his money through making weapons and selling them on the black market. He also did some crimes which made him catch Hero Factory's attention
Affiliation: None
Status: Alive, still out on the loose
Quote:
"Why is it that everybody always thinks my mechanical, black hand is my real hand, while my organic, orange hand as the mechanical one?"

Background: Strongarm is one of the most famous Makuhero City Black Market dealer, since his weapons are always made of high quality metal that all villains like. Then, he started to commit some crimes himself. However, on one unlucky time, he lost his right hand while fighting a hero and had to get a mechanical one. As stated in the quote, everybody always mistaken his hands. His riffle is a very powerful high quality custom gun made by him, and once shot in any part of a hero or citizen's body, they'll go unconscious. For the stronger people, it takes 2 shots, but not too much. 2 shots is nothing much. Because of how strong his riffle is, every hero sent to capture him ends up having to go to the Hero Factory's hospital. Soon, perhaps they have to use one of their biggest projects ever- the very strongly armour, has the strongest weapons, to catch him and put him into prison. However, there is on problem, which is that if their big project gets destroyed by this villain, all of the money spent on it would go to waste. So, before they sent it to deal with this huge threat, Hero Factory will let the hero go on smaller missions first to see how it goes. If he is good enough, he will be sent to capture this villain. As of now, Strongarm is still on the loose.