Here's my Lego hero factory villain MOC, Macer! Here's a picture of him. 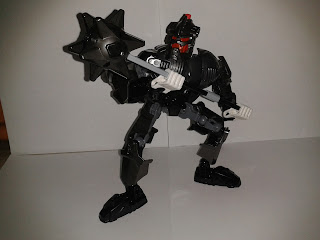 Name: Macer
Weapon: A very heavy weight mace
Colours: Black and gunmetal grey/dark pearl grey, plus white representing him wearing gloves(so that after he does a crime then Hero Factory realises it, it will be harder for them to find him.)
Personality: Macer is one of the worse villains ever you can find. He is very cunning, yet he is so strong, that he is nearly impossible to defeat. He is also sometimes a coward, but he really doesn't consider himself that.
Affiliation: A villain working for Black Phantom, but since he has been put to jail, he has temporarily taken his leader position and giving orders to other villains because he is second in command.
Status: Alive, out on the loose
Quote:
"You'll never know my weakness, you weak hero!"-Macer to a hero that is hit unconscious on the floor
Background: Macer is one of the villains who was hired by Black Phantom so that he could destroy Hero Factory even after The Legion of Darkness, Black Phantom's former group made, was broken. Macer was hired by him because he was known for his very vicious crimes and that he was nearly impossible to get beaten up by heroes thanks to the dark pure grey armour that can withstand anything on him. However, his weak spots are at the black parts which are the feet, his stomach and his lower arms. Even his head has a helmet that can withstand anything, so his head is really out of danger. His mace is probably as heavy as the one Black Phantom uses, but no one really knows. He is known to always use this weapon to wreak buildings and scare citizens and that is what always gets Hero Factory's attention. He is still out on the loose because of how easily he can beat up heroes and that he is protected nearly everywhere.

Written by Lynn
Posted by Anne Lim at 7:43 PM