Here's my Hero Factory MOC, Marcus Flamesword! Here's a picture of him. 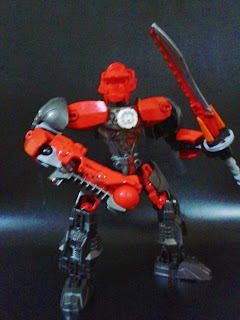 Name: Marcus Flamesword
Form: Brain attack(I know he has nothing from brain attack but he is.)
Weapons: Fire shooter and flame sword(Hence the name, Flamesword)
Colours: Gunmetal grey/Dark pearl grey and red
Personality: A devoted hero who is like a pyromaniac. However, he is also very loyal to the team leader, Zavier Supershot.
Affiliation: Hero Factory
Team: Hero attack team
Location: Makuhero City
Status: Deceased

Background: Marcus Flamesword was built in the assembly tower during the brain attack period and joined Hero Attack Team which consists the team leader, Zavier Supershot and a veteran, Tyron Light. His team was sent to fight the brain creatures, but Pygrox made the whole team severely injured and had to fall back. However, Supershot was kidnapped by (Corrupted)Pygrox to (Corrupted)Pygrox's base. Then, Supershot was deactivated and was installed with a dark energy battery. (Corrupted)Pygrox activated him again and Zavier fought the heroes who were without a team leader. While Tyron kept Zavier busy, Flamesword attempted to throw a grenade at Zavier to get him unconscious and see what happened to him. However, because he couldn't hold the grenade properly and dropped it to the ground, it exploded and the top of the building was also a bit burnt and he ended up killing himself. Tyron was so occupied that he didn't hear what Zib reported to him. By the time the healing team got to the scene, Marcus was presumed dead because no matter how much they heal him, he was still in an unconscious state.
Isn't this tragic? :p By the way, this is the first Hero Factory MOC I put the status as 'Deceased'.
Written by Lynn
Posted by Anne Lim at 10:30 AM