Here's my Hero Factory MOC, Zavier Supershot! Here's a picture of him. 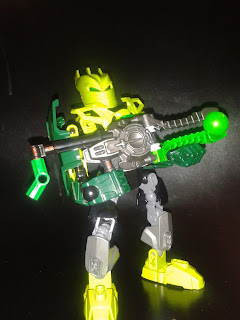 Background: Zavier Supershot was 'born with the upgrade' and was a very level headed person and prefers to be the team leader at all times.
After doing a lot of rescue and cuffing villain missions, he was soon upgraded with the breakout form and got another custom form for bravery. Soon, he was assigned as the new Hero Attack Team after the first Hero Attack Team's members were deceased. Teamed up with Marcus Flamesword and Tyron Light for brain attack, they were good to go. However, in the battle, they met 2 creatures which were extremely corrupted and was attacking them ferociously. In the end, to protect Hero Factory's just made hero, Flamesword, he sacrificed himself and landed himself to get captured by (Corrupted)Pygrox and brought to his base. In the base, (Corrupted)Bruigun put his nervous system to sleep mode and was put into a cylinder corrupting prison. He was then corrupted and started attacking Hero Factory. His team members were sent to turn him back to normal but to no avail, Marcus died from the exploding of the grenade he dropped on the roof ground. Tyron was so focused that he did not noticed it. However, Zavier severely shot Tyron in the core and he was immediately sent to Hero Factory's hospital. Amos Swordsman was sent to fight him and manage to make him unconscious long enough to turn him back to good. However, as (Corrupted)Pygrox and (Corrupted)Bruigun were still on the loose, the temporary team of 4, Shaun Burst, Tyron Light, Zavier Supershot and Amos Swordsman was sent to fight those 2 corrupted creatures. Swordsman did not enjoy having a team as he felt that he could do the mission alone- without anybody's help. Another reason is because sometimes, the team leader may just reject his ideas even when he thinks it will work. However, the 4 were captured to (Corrupted)Pygrox's base and put all their nervous systems to sleep one by one. Everyone in the team was placed in the same progress as what happened to Zavier Supershot earlier on. However, Amos Swordsman and Shaun Burst was able to reactivate their nervous systems and broke out of those cylinder corrupting prison before they were corrupted and started fighting them. After getting the brain creatures off Pygrox and Bruigun's head, they freed Zavier and Tyron from the cylinder corrupting prison and headed back to Hero Factory with the unconscious brain creatures.
(PS: Gun design credit goes to hfcustoms, a youtube user and I replicated the gun by eye from his MOC, Blaze 4.0.)
Written by Lynn
Posted by Anne Lim at 10:30 AM