Here's my Hero Recon Team MOC, Cole Rocka! Here's a picture of him. 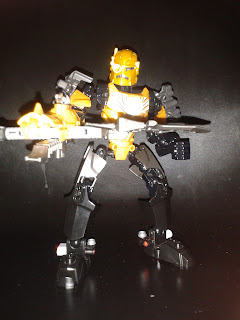 Form: Breakout
Weapon: Crossbow
Colours: Gold, black and a little bit a gunmetal grey/dark pearl grey
Personality: He is aggressive and usually can't wait for long as he really wants to fight off villains and save the day. However, he knows that he shouldn't anyhow step on the battlefield, otherwise, he might get into serious trouble.
Affiliation: Hero Recon Team
Team: -
Status: Alive, active
Background: Cole Rocka was made a month before Daniel Rocka and was ranked number 1 in Hero Recon Team.
Cole Rocka is usually very aggressive and sometimes don't think before he does something. However, he does try to always make his bow shooting skills better as he is always not accurate. Being one of the best agents, he still care for his brother and is always worried because he is afraid that something might happen to him in Hero Factory. During Brain Attack, he went to Hero Factory to train his bow shooting skills with Jay Acshooter as he was not satisfied with his shooting skills.
Written by Lynn
Posted by Anne Lim at 10:30 AM