Here's my Lego Hero Factory MOC, Bruizulk! Here's a picture of him. 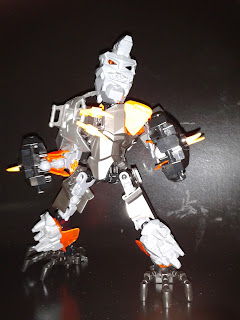 Background: Bruizulk is a rock monster part of Bruizer's species. He is perhaps one of the only few creatures that were not corrupted by the brain creatures when they first arrived. Actually, he was nearly corrupted, but he found out that when he hit the red spikes on the brain creatures, they will come out. The reason why he has the lava on his body even though he is not corrupted is because he lives in a part of the planet with rocks where the Bruizer species live has a lot of lava. His best friend is Orguz, who he mistook him as corrupted because of the brain creature on his head. He is currently in his home planet.