Here's my Lego ninjago minifigure MOC, Jacob! Here's a picture of him. 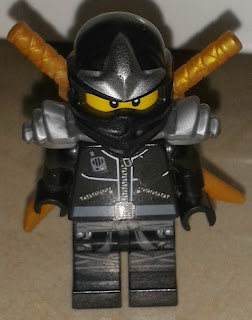 Element: Earth
Weapon: 2 golden swords
Vehicle: None
Background: Like Zane, Jacob is a robot who is a ninja, or 'nindroid'. No one knows who created him, except for himself and Aaron since they were made by the same creator. They were best friends and they helped to save Ninjago from some villains. They will never take off their hood in front of people they don't know. Being robots, they have great intelligence and like Zane, Jacob and Aaron is also able to make their own weapons disappear and appear at will. Jacob and Aaron both have the ability to set up a delayed elemental attack and to disappear from a place and appear at another place close to where he disappeared. When Jacob and Aaron gets stabbed, they have a reaction of the element opposite of them. For example, Jacob electrifies the person who stabs him when his element is earth.

Written by Lynn
Posted by Anne Lim at 6:28 PM